To share your memory on the wall of Francis Gordon Stewart, sign in using one of the following options:

Print
On the evening of February 27, 2021 our father Francis Gordon (Gord) Stewart found his well-earned rest from the burden of a variety of illnesses at the age of 89 years. Gord was born April 29, 1931 to Stanley and Greta Stewart (Feltham) in south sho... Read More
On the evening of February 27, 2021 our father Francis Gordon (Gord) Stewart found his well-earned rest from the burden of a variety of illnesses at the age of 89 years. Gord was born April 29, 1931 to Stanley and Greta Stewart (Feltham) in south shore Glovertown and he passed just a short distance from his birth house many many years later.
With the love of his life Ella, they leave to mourn seven children: Derek (Louise), Marilyn (Gerald), Ed, Austin (Colleen), Anthony (Sherry), Ann-Marie (Dave) and Paul (Sandi). From this, Gord and Ella were blessed with the following Grandchildren: Alec, Jeremy(Stephanie), Melanie, Adam(Harim), Michael(Karen), Jennifer(Steve), Jonathan(Jodi), Andrew(Sandra), Julie(Marcus), Matthew(Jenna), Russell, Ciara, Cormac, Sarah(Kris), James and 11 Great Grandchildren. Also left to mourn are his brother Abel and wife Millicent and nephews Ron, Stan and Bob and nieces Valerie and Janet and nephews Alan and Brian, his cousin Annie and step sister Doreen.
Gord was pre-deceased by his parents Stanley and Greta, baby sister Doreen, step-mother Evelyn, in-laws Allan and Lucy Tetford, brother Austin(wife Nellie), sister in laws Velna Ball (Tetford) and Marina Hayward (Tetford), brother in laws Percy, Maurice, and Bill Tetford and grandson Allan.
Gord was presented with many struggles in his early life. Losing a baby sister to Pneumonia and his mother to Tuberculosis by the age of 8 years, Gord and his two brothers Abel and Austin were left with their Grandparents for care as his father left Newfoundland for the Forestry service during WWII. During this time our father was provided wonderful care in the Wells household for which he was forever grateful. After completing high school in the South Shore United Church School, Gord left home to pursue 2 years teaching in out port Newfoundland and a year at Memorial university. Following this, in the Fall of 1951 he returned to his home to teach back on the south shore where he met Ella Tetford who was assigned to join him in the two-room school house. As they say, the rest is history!
Following their courtship Gord and Ella were married in 1954 and, after 4 wonderful years teaching and living in Gambo, they returned to Glovertown where they settled permanently on the south shore. Over his long life Gord served his community in multiple fashions. As a teacher and principal in the Glovertown school system, Gord pushed for and helped to establish a broad educational experience for all his students that included a strong Music and Art program, Industrial Arts and Physical Education. He was also committed to those students with learning exceptionalities, special needs and difficult backgrounds and felt strongly that these students deserved the most patience and attention. Gord was also heavily involved in Air Cadets, the Scouting Movement and he served on Town Council for many years. Finally, Gord was a prominent member of the Riverside United (and Faith United) Churches where he attended regularly and served in a variety of capacities.
Throughout his entire life, Gord was a hunter and gatherer. In his early life, this was done out of necessity as moose, salmon and berries were an essential part of survival for him and his brothers. Following these hard times, although his career afforded him the opportunity to provide for Ella and their children, Gord continued to enjoy nature’s bounty as a means to supplement their diet with both healthy food and wonderful experiences in the great outdoors. His favorite place outside of the south shore was 6 miles upstream on the banks of the Terra Nova River. Here, him and Ella along with their children, spouses and grandchildren enjoyed many wonderful years fishing, hunting and berry picking. It was here that he taught his family their greatest lessons.
In the last 30 years people knew Gord Stewart best for 2 things; exercise and FABEC. Gord’s commitment to both were unwavering. He and Ella (and anyone else who could keep up) ran, biked, skied and walked religiously. He believed being fit was the most important thing anyone could do for their health. His physical conditioning gave him the ability to explore further distances with ease and in many cases ‘lug’ a quarter of moose on his shoulder on the return trip. It was also his physical capabilities which allowed Gord to have such a high quality of life for so long despite his illnesses.
As a founding member of the Freshwater Alexander Bay Ecosystem Committee (FABEC), Gord was instrumental in promoting and helping to establish a set of guidelines which would help to conserve the salmon run on the Terra Nova river. As mentioned above he dearly loved to harvest nature’s bounty but he deeply believed that, if fishing practices did not change, the Terra Nova salmon run would follow the declines seen in so many other rivers in Atlantic Canada and around the world. As such, Gord helped to design and implement special measures that would reduce the number of salmon caught and retained. Naturally, these measures were met with the criticism of many anglers as they would no longer be able to enjoy the river as they once did. Despite taking an unpopular stance Gord stood by his beliefs as he felt they would lead to the best long-term outcome for the salmon run on the river. For this, I am eternally proud and grateful.
The family would like to acknowledge and extend their gratitude to Doctor Nancy Simpson, Nurses Amber and Greg from the palliative care team, and the staff of the Glovertown clinic. Their support and direction throughout the entire process was exceptional.
A private service is to be help at Oram’s Funeral Home at 12 pm on Tuesday March 2. This will be followed by an internment in the Riverside United Church cemetery in Glovertown.
Read Less

There are no events scheduled. You can still show your support by sending flowers directly to the family, or planting a memorial tree in memory of Francis Gordon Stewart.
Plant a Tree

We encourage you to share your most beloved memories of Francis Gordon here, so that the family and other loved ones can always see it. You can upload cherished photographs, or share your favorite stories, and can even comment on those shared by others.

Posted Mar 03, 2021 at 01:05pm
Ella,Anthony, Ciara, Cormac and all the Stewart family. Our sincere condolences on the passing of Gord. Thinking of all the family at this sad time. Niall and Catherine Gogan
Comment Share
Share via:
AA

Posted Mar 02, 2021 at 06:34pm
Deepest sympathy on your loss. Gord was a wonderful grandfather to Ciara and Cormac, and no doubt to all of his grandchildren. His family and his environmental protection work leave a wonderful legacy of a life well-lived. Hope your whole family is finding comfort in many fond memories.
Comment Share
Share via:

Posted Mar 02, 2021 at 01:50pm
Please accept our most heartfelt sympathies for your loss, our thoughts are with you and your family during this difficult time. Thinking of you all. 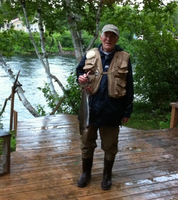