To share your memory on the wall of Vera Wyatt, sign in using one of the following options:

Vera was an active United Church and UCW member for many years and loved the company of others. Vera had unconditional love for her children, grandchildren, great grandchildren, friends, and her extended family at Baywatch Manor.

Vera Wyatt was born on May 1, 1933 to the late Wilfred and Caroline Janes. She is survived by her stepsister Margaret (Murray) and Stepbrother Howard (Carrie). On February 25, 1953 she married Fred Wyatt. They made a life in Traytown and had one son, three daughters, seven grandchildren, and six great grandchildren.

The funeral service will be held on Tuesday, March 19, 2019 at 2pm at the Glovertown Faith United Church.

In memory of Vera, donations can be made to the Traytown Cemetery Fund; flowers are also gratefully accepted.
Read Less

To plant a memorial tree in honor of Vera May Wyatt, please visit our Heartfelt Sympathies Store.

We encourage you to share your most beloved memories of Vera here, so that the family and other loved ones can always see it. You can upload cherished photographs, or share your favorite stories, and can even comment on those shared by others.

Flowers were purchased for the family of Vera Wyatt. 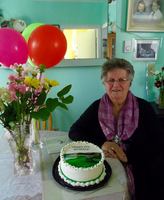